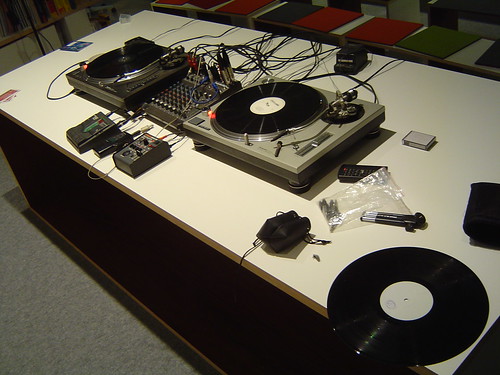 What a recordshops means to a turntable artist.

- what the DJ is playing

- how the DJ is playing

The turntable as a vehicle of art faces a dilemma.

On one hand it's just a stupid device for playing music. There's nothing very artistic about using it. Not even by DJs. Most of them are just craftsmen, who have changed from one instrument (guitar, drums etc.) to another.

On the other it's meta-machine which gives people the chance to create new things from already existing things. But this is not due to the turntable alone, but based on the facts, how music works in our culture. There's still a huge gap between the production and the re-production of music.

The turntable is a bastard.

The main question concerning a theory of turntablism is wether the turntable belongs to the realm of sampling or a category of its own right.

First of all the history of turntable use has shown that it stems from an productive misunderstanding: the will to achieve seamless loops.

This is clearly shown in the first turntable works in the musique concrete. With the radio station's resources in the background Pierre Schaefer was able to produce locked groove records for his pieces.

These special records have been employed by the radio station to fill empty time slots in the broadcast with continuous sound.

The record is not just any other object.

The record is a product. A result of mass production.

There's hardly a single record. A record is always a copy.